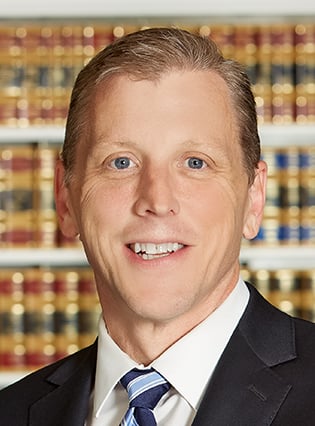 Attorney Edward E. Robinson is an experienced and passionate member of the legal team here at Cannon & Dunphy S.C. He has represented countless clients throughout his career, including victims of car crashes, police officers, victims of explosions, and more, successfully securing millions of dollars in verdicts and settlements. Mr. Robinson has been a member of the Wisconsin Association for Justice since 1995, and has held multiple positions including, Regional Officer, Treasurer, Secretary, and Vice President. He currently serves on the Association’s Board of Directors, a position he has held since 2009.

Milwaukee, Wisconson injury lawyer Edward Robinson graduated from University of Wisconsin-Madison Law School, where he served as a Note & Comment Editor for the Wisconsin Law Review, and was a member of the Phi Beta Kappa, Alpha Sigma Nu, and Phi Alpha Theta honor societies. In addition to his victories in court, Mr. Robinson has been honored by several nationally recognized organizations, and has been selected as a member of the American Board of Trial Advocates every year since 2014, been named to the list of Best Lawyers in America every year since 2011, and has been named to the list of Super Lawyers every year since 2009.

“My husband & I worked Attorney Robinson & he was absolutely amazing. He came to the hospital within a day of calling to set up the consultation & continued to check in on my husband throughout his recovery. He would call on the weekends to give us an update & was nothing but upfront & honest with us about our case. He genuinely cares about his clients. He is hands down the best attorney in the industry that handles personal injury cases.” – Bekki C.

“I never write reviews, but Ed Robinson exceeded my expectations. Would definitely consider Ed a “Super Attorney”. He is professional, compassionate and cares about his clients. Went above and beyond negotiating my settlement and regularly followed-up with me. If you are in need of an expert attorney, contact Attorney Ed Robinson.” – Ismael C.

“Ed Robinson exceeded my expectations, not only in the resulting settlement, but throughout the entire process. As a minor when the claim started, finding the right attorney and filing a law suit was extremely intimidating. Ed is kind, professional, and enjoyable to talk with. When my case went to trial, Ed blew the jury away and made it easy for them to rule in our favor…quickly! Going to trial could have been a horrible experience, but Ed and Kendra were patient, experienced, and made me feel comfortable from the start. Look no further if you are in search of an attorney. I don’t know how Ed does it- he is simply the best!” – Michelle W.

“In the unfortunate event that you find yourself suffering from the repercussions of an accident, I highly recommend you seek Atty. Edward Robinson. He is an amazing attorney! He is extremely smart and determined to help you. When I was recovering from my car accident, he was there EVERY STEP of the way to fight for me. He completely understood my pain and struggle, physically and with that of the opposing insurance company who refused to do what was right. He gave sound advice and helped me to receive a fair and just compensation for my past and future medical bills! I completely trust him, his judgment, and his extensive legal knowledge.” – Renee R.

In this case, our client’s spinal cord was severed and she was rendered a quadriplegic as a result of an automobile accident caused by the negligence of American Standard’s 16-year-old insured. Immediately prior to the crash, he was operating the Pontiac Firebird that his parents bought him at an estimated speed of 89 mph in a 35 mph zone. He crashed into the rear-end of our client’s car, and pushed her off of the road and into a utility pole. Her spinal cord was severed as a result of the impact. American Standard’s liability limits were only $500,000. Even though American Standard concluded within one week of the crash that it should pay those limits once it confirmed our client’s injuries, it did not pay those limits until nearly 16 months later. After American Standard finally paid its limits, we brought a motion before the circuit court seeking to recover interest from American Standard pursuant to Wis. Stat. § 628.46, the “timely payment of claims statute,” based on its failure to timely pay our client’s claim. That statute requires insurers to pay a claim within thirty days of being presented with proof of loss or equivalent evidence of such loss. Where an insurance company fails to timely pay a claim absent reasonable proof to deny its responsibility, interest starts running at the rate of 12% per year and continues to run until such time as the insurer finally pays the claim. In a case of the first impression, the Wisconsin Supreme Court agreed with us that § 628.46 is not limited to first-party claims but rather applies equally to third-party claims. The Wisconsin Supreme Court accordingly upheld the circuit court’s assessment of interest against American Standard.

In this case, our client, a City of Brookfield police officer, was struck by a hit-and-run driver shortly after midnight while responding to a call and proceeding on foot within a designated bicycle lane alongside West North Avenue. Our client sustained significant injuries that eventually forced him to leave his career as a police officer. The hit-and-run driver, who had been out drinking before the collision, turned herself in three days later but claimed she thought she struck a deer. She had underlying liability limits through Metropolitan of $500,000, and a $1 million umbrella liability policy. We subsequently filed suit on behalf of our client against the hit-and-run driver and Metropolitan. Metropolitan eventually agreed to pay its $1.5 million policy limits. The driver also made a personal payment of $40,000. All claims were then dismissed with the exception of our client’s claim for interest under Wis. Stat. § 628.46, the “timely payment of claims” statute. An initial demand for payment of the underlying $500,000 policy limits was made in May 2011, and, later, after our client’s medical treatment progressed, a demand for the full $1.5 million policy limits was made in February 2012, yet Metropolitan delayed paying the claim until February 2013. The trial court agreed with us that based on this delay in paying, Metropolitan owed statutory interest under Wis. Stat. § 628.46 and awarded $178,191.78 in statutory interest. Referring to this case as the “follow-up” to Kontowicz, the Court of Appeals affirmed the trial court. The Court of Appeals rejected Metropolitan’s argument that questions of liability remained even after its insured was convicted of hit-and-run, including “the degree of negligence that could be ascribed” to Metropolitan’s insured. Instead, the Court held that the proper standard of review to be applied was whether the trial court’s finding was against “the great weight and clear preponderance” of the evidence, and, applying this standard, the trial court’s finding was not clearly erroneous. The trial court found that Dilger had asserted estimates of damages that “far exceeded Metropolitan’s policy limits, regardless of any potential contributory negligence on Dilger’s part,” and the insured’s guilty plea showed that she “bore the ‘vast majority of liability.’” ¶15.

In this case, our clients—a mother and her young son—suffered significant burn injuries when their home in the City of Milwaukee exploded due to a natural gas leak. In the early morning hours of February 1, 2009, multiple residents in the 2400 block of North 10th Street in the City of Milwaukee called 911 to report a strong odor of natural gas. Milwaukee police officers and firefighters responded to these calls, and upon arrival, confirmed a “strong odor of gas throughout the block,” and observed “a gas break in the street” which was bubbling up. We Energies (the natural gas utility) was notified but the homes on the block were not evacuated. Instead, after contacting We Energies, all firefighters left and returned to their stations, leaving police officers behind to await the arrival of We Energies representatives. Our clients’ home blew up approximately 1 ½ hours after the first 911 call, and 1 hour after the firefighters left the area. The cause of the explosion was later determined to be the underground migration of natural gas from a break in the main line under the street into our the basement of our clients’ home, where the gas fumes accumulated until eventually ignited by the pilot light of their furnace. ¶¶2-5. Unfortunately for them, neither the firefighters nor gas company representatives evacuated them from their home or even warned them that they were in any danger. After the explosion, firefighters returned to the neighborhood, and a full-scale evacuation was ordered. We filed a lawsuit on behalf of our clients against We Energies and the City of Milwaukee. We eventually settled our clients’ claims against We Energies, but continued with their claims against the City. The circuit court ultimately granted the City’s motion for summary judgment, ruling that the police officers and firefighters were entitled to discretionary immunity. ¶10. We appealed and were successful in getting the Court of Appeals to reverse the circuit court’s decision and reinstate our clients’ claims against the City. The Court of Appeals held that the circuit court erred in dismissing our clients’ claims, for two separate reasons. First, the Court of Appeals determined that the City did have a ministerial duty to evacuate the residents in light of the natural gas leak because the Milwaukee Fire Department had adopted We Energies’ first-responder handbook for training its firefighters as to how to respond to natural gas leaks, and the firefighters had violated that training and handbook by not evacuating the residents. ¶¶14-17. Secondly, the Court of Appeals agreed with us that the “known present danger” exception to discretionary immunity also applied to preclude summary judgment, concluding that “[t]here is no doubt that the gas leak here was extremely dangerous, more than unsafe,” and, therefore, the firefighters had a ministerial duty to evacuate the affected residents. ¶19.

In this case, our ten-year-old client was struck by a car and injured after she was dropped off on the corner by her school bus. Under the “drop-and-go” policy of the defendant school bus company, school children who reside within the City of Milwaukee are dropped off by the bus on the corner and told to wait until the bus departs to cross the street. Under this policy, the defendant school bus company and its drivers do not assist the children in crossing the street. By contrast, in rural areas, school buses do not drive away after dropping off children but rather remain at the stops so that the drivers can assist the children in crossing in front of the bus. Once the bus pulled out into the intersection, our client started to cross the street behind the bus in the crosswalk. Unfortunately, the bus stopped in the intersection to make a left turn, and obstructed our client’s view of oncoming traffic. Although the bus driver saw an approaching vehicle, he did not honk his horn or do anything to attempt to warn the approaching motorist of the presence of our client, or to warn our client of the approaching car. We argued that the defendant school bus company is a “common carrier,” and, accordingly, was required to exercise the highest degree of care. We argued further that the defendant’s “drop-and-go” policy was inherently deficient and in violation of its “common carrier” duty of care. The circuit court disagreed with us, and refused to instruct the jury as to the defendant’s “common carrier” status and duties. On appeal, we successfully obtained a new trial. The Wisconsin Court of Appeals agreed with us that school buses are “common carriers,” and therefore required to exercise the highest degree of care. Upon retrial, we obtained a favorable verdict against the school bus company on behalf of our client.