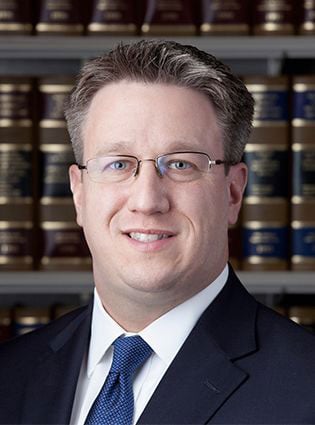 Allan M. Foeckler, a Milwaukee accident lawyer carved out a name for himself throughout the courtrooms of Wisconsin through a detail-oriented approach to personal injury law that has resulted in countless successful settlements and verdicts. Allan is a member of several legal organizations throughout Wisconsin, including the Milwaukee Chapter of the American Constitution Society, the Wisconsin Judicial Council, the Milwaukee Young Lawyers Association, and the Wisconsin Association for Justice.

Mr. Foeckler graduated from Marquette University Law School, where he was a member of Alpha Sigma Nu Honor Society and part of the Marquette Law Review. Over the years fighting for the rights of injured victims, he has earned numerous notable awards, including being named to the list of Super Lawyers every year since 2012. Mr. Foeckler also earned the 2017 Robert L. Habush Trial Lawyer of the Year award from the Wisconsin Association for Justice after successfully representing victims who were killed and injured after a 13.5-ton panel fell from the O’Donnell Park garage façade.

In 2011, my elderly parents were involved in a traffic collision when a person driving another vehicle disregarded a red traffic control signal and T-Boned their car. Thankfully, my parents were not seriously injured but they were pretty banged up and their car was a total loss.

My parents retained your firm and Mr. Foeckler was assigned the case. My mother, whose health was poor before the crash, subsequently passed a few years later. The settlement was modest-a few thousand dollars, but the money was awarded after my mother’s death. Mr. Foeckler assisted my father with the probate case and even went as far as to pick my dad up at his home and drive him to court.

I know some attorneys offer to come to a client’s home, as advertised on television, and Mr. Foeckler did that as well in the initial phases of my parents’ case, but this act was far above and beyond what I would ever have expected; especially for a tiny settlement. I actually sought the unofficial advice of a very good friend and neighbor of yours, who is very well acquainted with the courts, and he suggested I contact your firm. Come to think of it I believe my friend might have mentioned it to you and Mr. Foeckler contacted me. Anyway, the way Mr. Foeckler treated my father, confirms that your firm, and it’s representatives are genuinely interested in helping people, regardless of the size of the case.

Please pass along my gratitude to Mr. Foeckler for the kindness he showed towards my parents.

If I ever require services of an attorney, I will certainly retain your firm.” – -Gregg Duran

“We wanted to express our gratitude for your efforts and dedication to our case.  It was a long process but you stood by our side the whole time.  We could never thank you enough for all you did!” – David and Katie

“Al settled our car accident/personal injury case in a very satisfactory manner. He explained the legal process very clearly, returned phone calls in a timely manner, consulted with us at each step of the way. He was honest, straight forward, and clear. We could not be more pleased with our experience and would highly recommend him to our friends.” – Brian

“I never once regretted my decision to hire Al Foeckler for legal services. He was professional, organized and efficient throughout the process. His communication throughout the resolution of my case was consistent and he always took the time to explain things to me thoroughly. Above all, Al always dealt with me in a compassionate manner. He never underestimated the suffering I had gone through after my accident. He consistently put forth his best efforts which resulted in me winning my case. I can’t thank him enough for his work and guidance throughout this process.” – Deb

“Thank you for your expertise in assisting to get my case settled!  Since I have never been involved in a legal case, I appreciated your education and guidance.” – Janet